Today was one of those days that you follow through on a recommendation from a friend.  Wednesdays are usually my burger, fry and milkshake days but today I decided to stop by Bill’s Restaurant and shake up my normal lunch routine. Bill’s restaurant is located in the Rushden Lakes shopping district and boasts an amazing view of a lake with swans. The inside of Bill’s is so inviting with its shabby chic decor.  I loved looking around at the walls while I ate. 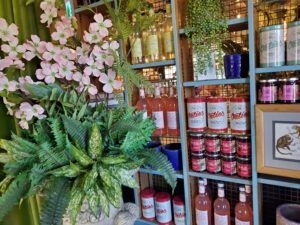 Bill’s has a lunch and dinner menu to include a separate vegetarian menu. Currently they are celebrating Veganuary and have an entire menu with vegan options for the month of January. I ordered a vegetarian lunch but didn’t get to order off their Veganuary menu.  Don’t worry, I’ll go back soon to bring you guys the deets.
My friend ordered the daily special which was a grilled chicken with Rosemary and Brie cheese on top, served with a side of broccoli and.  She was kind enough to let me take a picture and have a bite. I love a good rosemary chicken and the Brie on top was just the icing on the cake.

For my starter, I ordered a sweet potato and ginger soup. I must admit I was skeptical about how the ginger would taste. I was pleasantly surprised at how awesome it was. Not only was it appealing to the eyes it tantalized my tastebuds. It was garnished with micro greens and pink peppercorns.

For my main, I opted for the carrot, cashew nut and mushroom Wellington. It was placed on a bed of mashed butter beans and served with a side of long stem broccoli. There is something about flaky phyllo dough that makes me all happy inside. The broccoli was perfectly cooked and the mashed beans were very reminiscent of mashed potatoes. Once I poured my gravy on them there disappeared..I don’t know what happened.  They were on my plate one minute and the next minute they were gone. Let’s just say mashed beans will be a thing in my house very soon.  My Wellington was outstanding!! The carrots were tender, the mushrooms melded with the cashews and created magic. I highly recommend this dish if you are looking for a vegetarian option at Bill’s. Just don’t do like I did send burn your mouth trying to scarf it down lol.

Overall it was a great dining experience and I honestly don’t know what took me so long to try it.  I’m looking forward to going back already.
Forks Up!

One of the most adorable towns in England I’ve been to is Oundle. At the request of one of my very best gal pals, I made the journey to Tap and Kitchen in Oundle to say farewell over dinner. I was impressed my very first time so I returned bringing along my family so they could experience a Tap and Kitchen meal. This review is a combination of both experiences which were lovely.

Tap and Kitchen is just on the outskirts of Peterborough. Right as you pull into the town it is on the right hand side and it has it’s own little wharf. Don’t go too fast or you will pass right by. The parking lot is gravel, so on rainy days be sure to have some wellies close by. When you walk inside you are transported to a homey shabby chic place. There are velvet chairs and frilly lampshades hanging from the ceiling. There is also an outside seating area but I don’t suggest outdoor seating during rainy season.
Tap and Kitchen Oundle reminds me of one of my favorite places I like to consider one of the best kept secrets in Tampa – Stein and Vine. The menu changes daily so if you see it and want it get it, because chances are it won’t be there tomorrow. The bar is stocked full of gin and other spirits and flowing from the tap are local beers. Now to the best part…the food.

These scallops were featured on my Instagram account and are quite possibly the best scallops I’ve ever had. These king scallops are served on a bed of peas, chorizo, samphire and potato puff. Not only are the colors visually appealing, the texture of the peas, potato puff and chorizo complement the scallops.

Ever since I had my first bite of sweet potato gnocci, I’ve been hooked. The first time I tried it was at Boca Brandon.  Anytime I see it on a menu I have to order it and this time was no exception. There is just something about the sweet, savory, melts like butter gnocchi that can not be denied. Pair it with some asparagus for that added crunch and voila you’ve got yourself a star dish. I was so convincing with my order, three of my friends ordered the same thing. I’ll just say none of us were disappointed.

I was initially skeptical when I ordered the zucchini, tomato and chorizo side.  I must say that I was pleasantly surprised.  Somehow it worked.  The zucchini was still firm and the chorizo gave it just enough kick.

Me and my one of my best gal pals as we say see you later.  She is the reason that Tap and Kitchen is forever a part of my life. Thanks Brook!